In Musings, Uncategorized on

Romanoff’s: The Hollywood Hotspot of Yesteryear 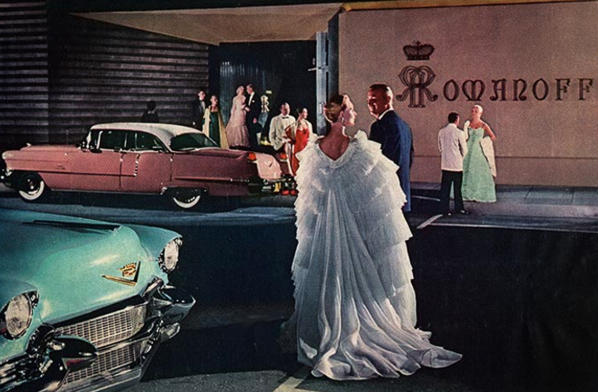 Glamour, gossip and golden Oscars! I imagine I’m not alone in thinking wistfully of Academy Awards past and with the Oscars being presented this Sunday evening, it’s fitting to take a look back. In the glittering heyday of Hollywood, the stars would congregate at Romanoff’s in Beverly Hills to celebrate wins while wining and dining. As it turns out, this restaurant’s history is as captivating as the silver screen celebrities it hosted. 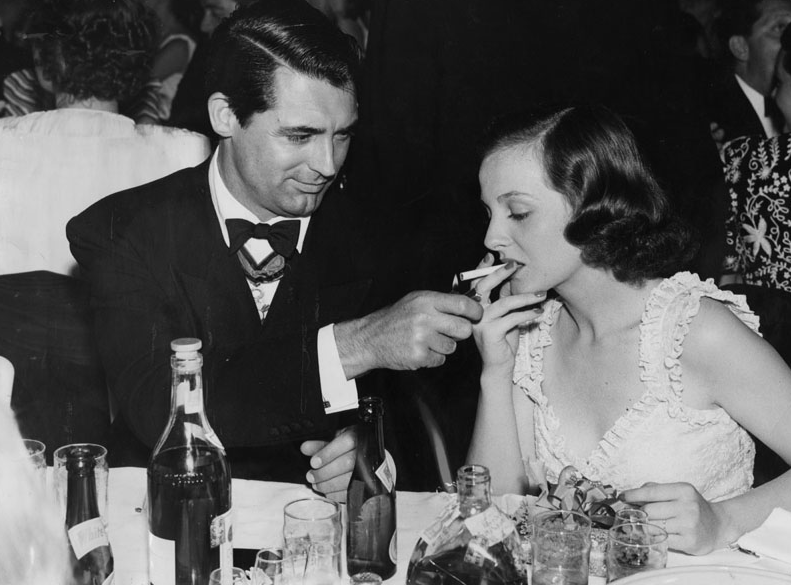 In a town where playing make believe was a coveted livelihood, expert imposter Michael Romanoff found the perfect place to reinvent himself and become a successful restauranteur. Harry F. Gerguson (born Hershel Geguzin), a tailor from Brooklyn, tried on a Russian royalty persona for size, opened Romanoff’s restaurant in 1939 and made it the place to see and be seen. Some knew him as Count Gladstone, others as Prince Michael Dimitri Alexandrovich Obolensky-Romanoff and most were hip to his deceptive identity. This, however, intrigued Tinseltown’s biggest names and made Romanoff’s a hotspot for the likes of the original brat pack, Katharine Hepburn, Lauren Bacall and many more. 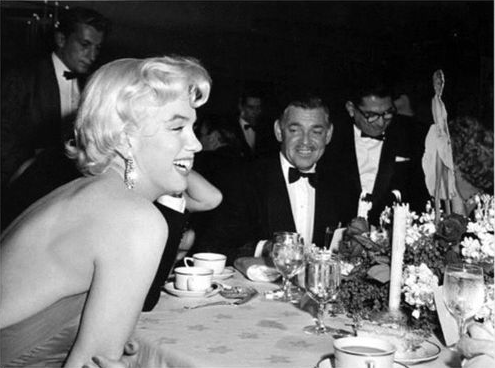 Marilyn was a big fan of Romanoff’s signature chocolate souffle.

For 20 years Romanoff’s played host to movie premiere parties such as Marilyn Monroe’s The Seven Year Itch, Natalie Woods’ surprise 21st birthday party and the annual Academy Awards after-party. Set on tony Rodeo Drive, the restaurant served up steakhouse staples such as Lobster Thermidor and Filet Mignon with Bordelaise delivered by smartly uniformed waiters to cushy corner booths reserved for their most dazzling clientele. Romanoff preferred to break bread with his two bulldogs at lunch but in making the rounds would glean plenty of hearsay from his clients which he compiled in a weekly gossip column in his menu called Romanoff’s Round Up. 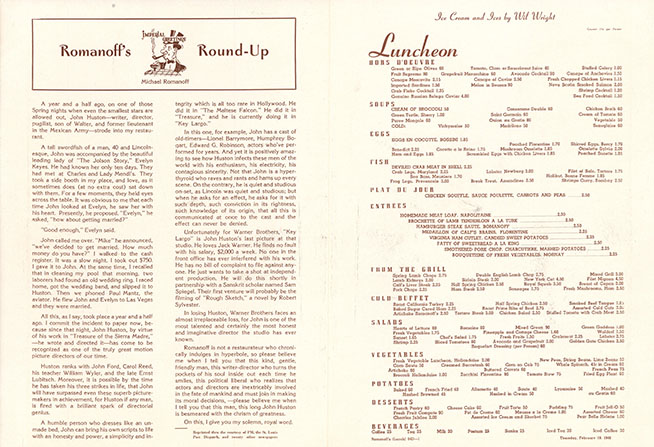 a luncheon menu is accompanied by the latest gossip! 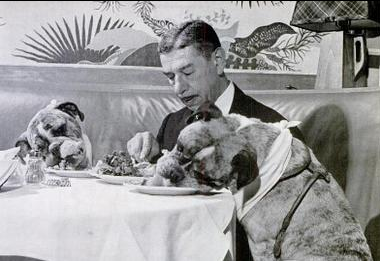 Anything goes in La La Land…

From Grace Kelly celebrating her The Country Girl Best Actress trophy to Myrna Loy and her husband toasting to their divorce and Jayne Mansfield having that infamous wardrobe malfunction in front of Sophia Loren, the booths at Romanoff’s had seen many a Hollywood insider moment. Julia Child is said to have frequented the L.A. haunt for her fix of Strawberries Romanoff and Bogart would order the same three drinks with lunch every day; two scotch and sodas and one coffee with brandy. While entertaining his glitziest patrons, Michael made sure to give the same white glove treatment to his disgraced friends such as Walter Wanger who was in prison for shooting his wife’s lover. A silver tray with Wanger’s favorite Romanoff’s dishes was served to him everyday in jail, courtesy of the restauranteur. 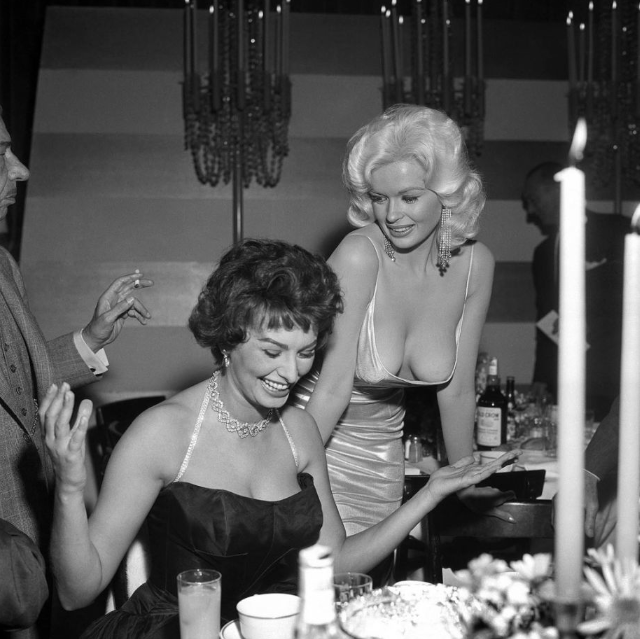 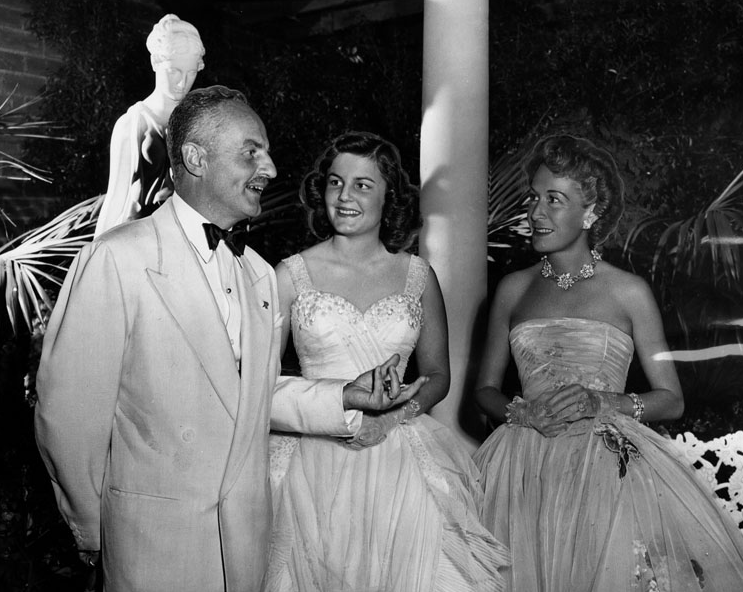 The Zanuck family at the receiving line of their dinner dance for the Marlborough School graduating class of 1951. Image courtesy of the Los Angeles Public Library Photo Collection.

Like most trendy establishments, the once hopping restaurant saw its A-list clientele dwindling and threw one last hoorah on New Years Eve 1962. Slim Aarons was there to capture every star-studded moment as the bon vivant proprietor charmed his guests well past midnight. As the selfstyled prince put it, “For years I have been supplying adventure, by proxy, to those who have desired it. I have given more enjoyment, I think, than I have received.” Cin cin to that! Will we look back on this 2018 awards season with such fondness years from now? I have a feeling all the assault scandals, talk of who arrived in a fuel efficient car and more political commentary than C-SPAN will overshadow any such admiration! Perhaps we can hope for a few lovely red carpet looks?

PS Have you all seen any Best Picture nominees? I had high hopes for Lady Bird but found it less dazzling than Mistress America, an independent film by the same director. All the Money in the World and I, Tonya are on my to-watch list!

Inspiration in spades for all your formal winter f